It is largely thanks to the computer age that many owners are now aware that rabbits should not be kept on their own.  However, sometimes this message gets across only in its most simplistic form, with the result that people end up with issues concerning breeding and fighting in rabbit groups.  This article tackles the difficult situation of more than one rabbit living with a mum with babies. 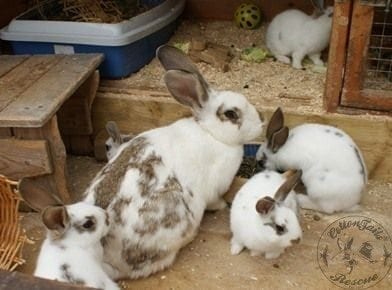 Two females living together, and one gives birth

The success or otherwise of this situation depends on how long the females have lived together, how well they get on, and how much room they have. If they have lived together for some time and are strongly bonded together there shouldn’t be much friction between them even with the arrival of a litter.  This is especially true if they have lots of room to get away from each other if they wish to.  However, on the assumption that the babies are in a nest in the sleeping area of a traditional hutch, it is always a risk that the second female may go into the sleeping area as she has probably done in the past before the arrival of the babies, and by doing so may well stimulate the babies to think it is feeding time, with the result that they all start popping up in anticipation of the meal to come.  The babies may then start wandering off or may split into two or three groups within the nest, which usually results in fatalities as mum will not recognize her babies and will at best ignore them and at worst will eat them.  To avoid this situation, a litter board about 3 inches high can be fitted to the entrance of the sleeping area (but still allow enough room for mum to go in) to stop any babies wandering out of the nest completely, but the nest will still need to be checked daily to make sure that all the babies are all in one group.  If they are not, only one group will be fed by mum and the others will starve.  If they have divided into two groups, simply move them gently back into one group again whilst mum is out in her run, and keep her out for at least a couple of hours afterwards to allow your scent to disappear and the babies to settle down. There are some situations where the “second rabbit” or even mum will try to scatter the babies by digging in the nest, and if this behaviour is shown it is safest to not let “the other rabbit” access into the hutch at any time until the babies are 3-4 weeks old and are actively coming out of the nest anyway.      If the arrival of the litter causes tension between the two females, it may be best to let them run around in a separate pen during the day, and hutch them separately at night, mum returning to the hutch containing her babies (which she will only feed for a few minutes during the night anyway).  By letting the females have this contact during the day, you make it more likely that they will be able to live together again once the babies have gone.  If they are separated completely, the chances of them getting back together again is slim.  For long-term bonding, both females should be neutered (once the babies have gone) to give them the best chance of staying together amicably, although it is not guaranteed that even neutered females will live together happily in the long-term.  If the females start to fight badly and they have to be separated, the best course of action would be to match each female up with a neutered male once the litter is gone and the females have been spayed. 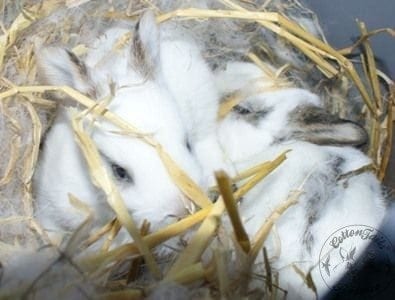 Two females living together and both having litters

The points raised above are also relevant here, with the added complication of having two separate nests or one large pile of babies from both litters.  It can work, and I have witnessed a situation where a group of several female rabbits were all living together freely in a large room, when two gave birth within hours of each other, with nests only a foot apart.  Both litters were successfully reared, the babies being checked daily to make sure they were fat and content just in case both mums decided to feed the same litter and ignore the other.  If there are two litters in a small area such as the sleeping area of a hutch, this may cause tensions between the mums that may lead to the possibility of having to move one mum and litter to another hutch. This can be done without jeopardizing the babies if it is thought essential for the safety of the litters and mums concerned. Moving a young litter Another hutch needs to be prepared in advance, and both mums put out in their run for a few hours.  Rub your hands in some of the soiled bedding and lift one set of babies and their nest into a box.  Rearrange the remaining babies and nest so they are comfortable and all in one group.  Transfer the other babies into the new hutch and make up the nest in the sleeping area, adding in more hay if necessary, making sure all the babies stay in one group.  Leave both females out in the run for at least a couple of hours afterwards to make sure the babies settle down again, and when you return the females to their hutches, give them a tasty treat or food to reassure them.  They may go into the sleeping area to have a look, but usually come back out again within a minute or so.  If the females tolerate each other in the run, then let them share it during the day, to give the best chance of them being reunited after the litters have gone.

Female with litter and neutered male

Many of the points raised in point 1 are also relevant here, on the assumption that the male has been neutered for at least 1 month (so he is infertile).  If he becomes a bit of a pest by mounting the female and not leaving her alone, it may be best to house him separately for a couple of weeks but to allow contact with the female during the day in the run to keep their pair bonding strong.

This is an intolerable situation for the female, who not only has to cope with the advances of a male whilst she is making the nest and giving birth, but also has to awful situation of the male mating her literally whilst the babies are being born. There is also likely to be fighting between the pair, as the female tries to protect her nest site from the male.   If you are aware that the female is pregnant, the male should be taken away completely and should not return until he has been neutered for at least a month to make sure he is no longer fertile.  In the meanwhile it would be an advantage for the male and female to be able to see each other through a strong wire partition in the run so that it will be easier to get them back together again once he is safe (he is fertile for up to 28 days after castration). The message is clear – rabbits do need company, but this needs to be done carefully and responsibly so that it does not end up in disaster for the rabbits and heartache for you, as well as possibly a big vets bill.  YOU HAVE BEEN WARNED!