STRESS BONDING – what does it mean? 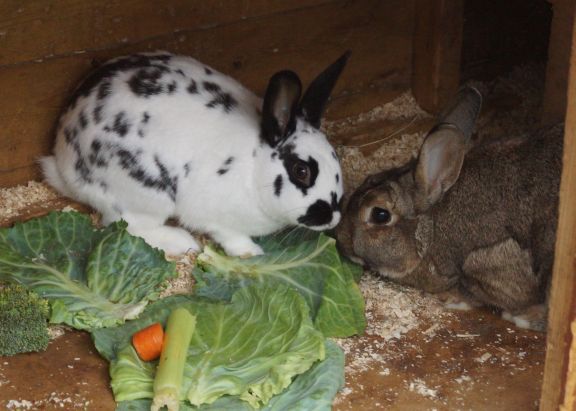 You only need to open up an animal magazine or take a look at a rabbit website to see how much has now been written about bonding rabbits, the pros and cons, and various “tried and tested” techniques for guaranteed success.  If only it was that simple.  Alongside this flurry of seemingly endless information has appeared some rather controversial methods of bonding where the rabbits are deliberately stressed to help them accept their new friends.  Whilst none of the following examples can be condoned for obvious reasons, some of the so-called stress bonding methods include:

These rather controversial techniques are balanced with methods that are widely used but still involve an element of stress:

So, what are we actually doing to our rabbit’s health and wellbeing when they are stressed through bonding?  No matter what method you chose, there is always going to be an element of stress involved in any match-up, regardless of how well planned or how compatible the rabbits concerned may be, but it is keeping this stress to a minimum that is the important thing as there is no doubt that with stress comes a whole range of potentially harmful changes that can affect health and behaviour.  See the article on bonding on the website for a full account on how to bond rabbits. Although trying to bond rabbits will inevitably be stressful to them, there are other factors that cause stress too and every rabbit owner should be aware of them.  Such factors include handling, pain, unfamiliar surroundings, travelling, changes in temperature or extremes of weather, loud noises, proximity of predators, and illness, amongst others. In rabbits, the perception of a dangerous, frightening or stressful situation causes the brain and the adrenal glands to release chemicals such as cortisol and adrenaline that have a direct effect in the rabbit’s body (1).  It is these that cause a rabbit’s heart rate and blood pressure to rise, with increased blood flow to certain muscles and organs and away from those that are not essential in a dangerous situation (2).  As the respiration rate increases, the eyes dilate and the blood sugar soars, and a decrease in gut motility is apparent.  In the short term, such effects are advantageous as the rabbit is placed in a heightened level of awareness and is able to respond quicker should it need to run away from danger.  However, if stress persists for a long period, this can have a very negative effect on the rabbit, with the potential development of gut stasis, enteritis and depletion of liver energy stores.  This latter point can have a devastating effect especially on overweight or obese rabbits, and this is why such rabbits can be at higher risk of sudden death if under persistent stress.  Interestingly, in a study on wild rabbits and the effects of stress, it was found that exposure to stress over a period of 2-4 weeks resulted in a significant decline in body condition in all of them but this was offset by an increased survival rate when released back into the wild in some (3). 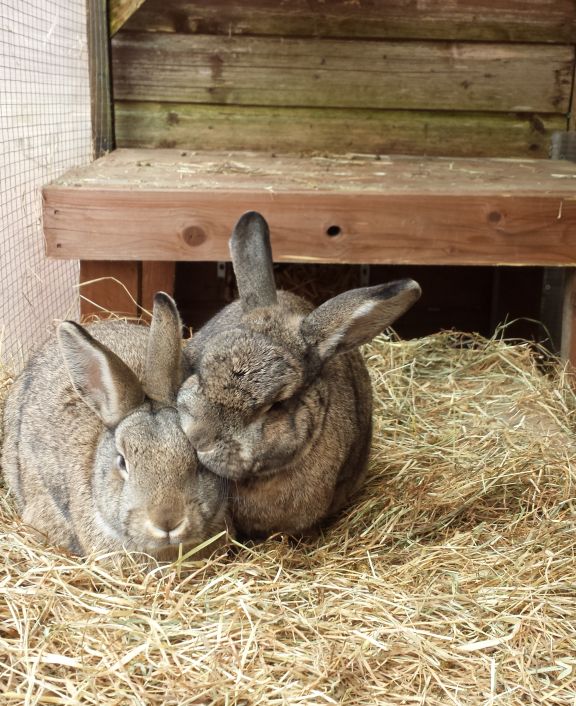 An important factor in trying to minimise stress when bonding rabbits is to take into account not only the general health of the individual but also the temperament of the rabbits concerned.  In a study on the effects of stress on meat rabbits, it was shown that fearful rabbits had a stronger reaction to stress than those that were more confident (4).  Response to stress can therefore vary from individual to individual, and some are not able to adapt to the stressor with potentially serious effects on their health, whereas others adapt to the existing conditions, and symptoms such as increased respiratory rate return to normal within a short space of time, even if the trigger for the stress is still present. What we all need to take away from this is that when bonding rabbits, no matter what method we choose, we must take into account the suitability of the technique in respect of the temperament and health of the individuals concerned for the best chance of success and with the least risk to the rabbits health and wellbeing.  The mechanics of bonding rabbits can be fraught with problems, but the basic process is much the same whether you are bonding a pair or even attempting a group. Following the bonding basics below gives the matchup of two rabbits that are strangers the best possible chance of being successful:

When attempting to bond several rabbits together, this must be done with extreme caution as serious fighting can occur.  If the rabbits that you want to bond into a group already know each other visually by living in adjoining pens, the introduction may well be easier, but it is best to start from scratch just in case, and then decide which method of bonding you want to follow.  Personality is arguably the most important factor when attempting to bond a pair or a group, and unfortunately it is not a trait that is easy to work out in advance, as it is only when the rabbits are together that you will see the personality type of each individual.  It is also not uncommon for rabbits to behave in a submissive manner with one partner and then be the dominant one with another, so you really need to see the interactions between all the individuals to determine what sort of personalities you are working with in that particular situation. No matter how much we try or what methods we use, some rabbit bonding attempts will not be successful simply due to the fact they have incompatible personalities, and this is an important point to bear in mind as prolonged bonding attempts with such individuals will result in massive and harmful stress to all individuals concerned, including the owner!   References 1.  Baias A. et al.  Stress in Laboratory Juvenile Rabbits: Physiological Indicators. Scientific Papers: Animal Science and Biotechnologies, 2012, 45 (2) 2.  Jenkins J.R.  Frightened as a Rabbit, The Anatomy and Physiology of Fear and Stress in the Rabbit. www.drexotic.com 3.  Cabezas S. et al.  Physiological Stress Levels Predict Survival Probabilities in Wild Rabbits.  Horm Behav. 2007 Mar;51 (3): 313-320. 4.  Kowalska D. et al. Effect of Stress on Rabbit Meat Quality. Ann. Anim. Sci., 2011, Vol. 11, No. 3, 465-475